A project in south west London saw a firm of architects tackle a difficult commission to extend a listed former coach house, resulting in a dramatically open new addition.

The owners of a terraced house in leafy Barnes, in the London borough of Richmond, turned to Hogarth Architects when they wanted to refurbish the property, but at the same time fundamentally enlarge their living space. However achieving the right design in this Conservation Area would be a test for architect and client.

The finely-designed and award-winning two-storey extension provides a double height internal space which opens out onto the large garden, flooding the interior with copious natural light. Substantial motorised sash glazing maximises the views out.

The extension is clad in striking dark fibre cement panels which sit well with the existing glass extension to the property, while offering a contrast. Within the property, a beautiful bespoke contemporary metal staircase with Dinesen timber steps provides access to the newly refurbished and extended basement; the heart of the home with family sitting area, kitchen and media room. The finishing touch to this highly desirable property is a new gym/play room in the garden, also clad in fibre cement.

Architect on the project (and practice founder) Ian Hogarth commented on his chief design approach for extensions: “All our work is typified by a desire to always bring in light and space, and for the result to be practical whilst giving a joyful feeling.” He adds: “much of our work is about bringing the 21st century into 19th century housing stock.”

The client’s demands were exacting: “They wanted something crisp and contemporary as a foil to the historic house,” and this in tandem with the planning restrictions meant that “the journey was not for the faint hearted.”

He adds: “Muniza had a very clear vision for what she wanted for her family. However with the building being listed, many of her ‘opening up’ ideas were never going to be approved. Whilst we were very keen, I had to tell her honestly, she was choosing a very difficult path, and her architectural dream would be easier to realise in another property!”

He says that her “quiet resolve” meant she was determined for her family to stay in this location, “so if the design had to flex, then so be it.” From an initial meeting it took four years to get on site. “The difficulties surrounding the building’s listing were even more than we had warned, and it is fair to say when we eventually found our way through it, the clients were exasperated and the relationship strained.” He adds that the planning department didn’t help: “Whilst we are fairly used to intransigent planning departments, this one almost exhausted all parties’ resolve.”

He asserts that planning officers may have little experience but wield “huge power, little responsibility and timescales are not something they like to concern themselves with.”

After several years of discussion, plus an appeal, and the client contacting local councillors, the architects were able to have access to “an experienced and knowledgeable” Senior Conservation Officer and eventually got a negotiated consent.

Hogarth says: “It was hard to explain this prolonged scenario to our clients, and our whole relationship had to be slowly rebuilt.” However he admits: “Through these dark days Muniza never lost her resolve. Many conversations ended with a mutual agreement that as we were not attempting to cross the Mediterranean in a leaking inflatable; relatively speaking, our shared problems were modest.”

“Together we made the most of the planning consent we got, and whilst compromised, the overall vision remained. The design development progressed with Muniza and our senior staff, with me popping up at tricky moments to broker and assist in some of the decisions.”

He concludes: “This was relatively easy as Muniza’s vision never changed, and she had the skill of being able to express her aesthetic needs in language we could pick up on.”

Despite a host of issues, including budget and programme challenges towards the end, this determined partnership of client and architect produced a finished result that both parties are proud of. 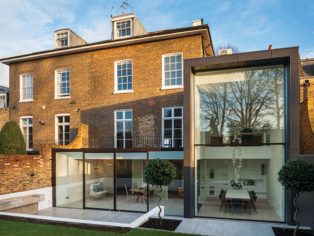