Selfbuilder + Homemaker is following Andy and Sarah Ball as they build their modern, eco-friendly home in a popular Derby suburb. Sarah brings us up to date with its swift recent progress, including how they helped educate local children on site safety.

After four years of failure to start, the house is going up super-fast. When we last left you, we had a clear site. Initially the heavy rain and cold weather held up proceedings, but the warm summer has played into our hands for getting on with the job.

The cost of the foundations is one of the aspects where you can really go over budget. We had tree root issues as well. The house is next to a large car park and we have several large trees on a three metre wide strip that creates the boundary. We looked at several ‘insulated raft’ systems and, in the end, we decided to use a traditional concrete raft. There would be far less impact on the site, and it meant that rather than digging trenches, we would clear a level space so that considerably less earth had to be removed.

With the tree roots, we would have had to dig down to 1.8 metres. We’re on wet clay, which would have been hard work. From the test dig we knew that the water table was at a depth of one metre. The builders were reminded of this when we were digging the trenches for the services on the plot, as water poured in!

If we had gone down the route of traditional strip foundations, we wouldn’t have been able to get onsite when we did. The weather was still very wet when we started removing the earth and levelling the plot ready for the raft. It was very quick – within two weeks it was completed. The strengthened concrete raft foundation was poured on one day, and as well as the sav- ings we made in time, it also came in un- der budget. It was only a couple of hun- dred quid, but it all counts in a self-build.

Having looked at and costed various non-traditional wall constructions from timber frame and insulating concrete formwork, to single skin with external wall insulation, for our project we found that a traditional cavity wall was the cheapest and quickest option. Our challenge was to make this traditional approach as energy efficient as possible. Wall thickness wasn’t an issue, so we chose a blockwork construction with 150 mm of mineral wool cavity insulation and a 63 mm PIR insulated plaster board. With the rising cost of PIR insulation this year, it was a cost-effec- tive system to use for Number 41.

Andy knew that there was a potential issue of cold bridging between the concrete raft and internal wall. He spoke to Dave, the architectural technician at Matthew Montague Architects, who told us about an ingenious structural insulation block to fix under the first course of the internal walls – Marmox Thermoblock. We’ve found it really interesting creating a highly insulated house using mainly the methods and materials for a traditional build, but adding in some twists to bring it into the 21st century.

Seeing the brickwork for the first time between the front entrance and the garage door was amazing. The reason I get so excited about things like this is because we have to make so many decisions to get to this point. When we decided that the relief detailing against the light render was going to be black brick, I thought that was the choice made. But no, what type of bricks do you want? And you’d be surprised how different they are – we decided on the black Ibstock brick.

Then there’s another decision – to choose the colour of the mortar. That was easy – definitely black. After that, I saw some brickwork on the internet that I really liked, it was very straight, without any overlap in the bricks. We asked Paul, our project manager, if we could have that design. Because it’s only in the relief work, this was possible, but as there’s no overlap it had to be strengthened from the back. The final decision was made on the morning the wall was being built, when we were also asked what design of mortar we wanted – I didn’t even know there were different styles! Fortunately, we found diagrams and pictures on the internet, and we opted for flush. That’s why, when we see it for ourselves, there’s a massive relief that the options we’ve gone for look good.

We visit the site most days, and already have hundreds of photos. We have also had lots of conversations with our close neighbours. It’s a big contrast to when we lived in the house on the site, when it was a rarity to see people, now we regularly chat in the street! Most people are really interested in what we are building and how it’s going.

The site is very visible as it’s on the main road into Allestree, and we wanted to make sure that it was safe. The plot backs onto the rec, which attracts hundreds of people every day. Football teams, children in the play park, the Allestree cricket club and dog walkers all share the space, and we have made it easy for them to get information about the site.

One thing that we did was visit the local primary school to talk to them about what was being built on the site. Along with construction safety expert (Suzanne from Kedleston Safety), we instilled in them the importance of staying safe, and even ran a competition for site safety posters. Suzanne wrote the site safety manual for the build. We went back to deliver prizes and visitors to the site get both the official safety posters as well as the winning designs from three of the pupils.

We also showed the school children video footage of the house being demolished, so we had their full attention. It was a really good opportunity to talk positively to children about jobs in construction.

The build is in full swing now. By far the most exciting part of the build was watching a tonne of steel being craned into place. Ominously – on Friday 13 July – possibly the largest crane Allestree Rec had ever seen hoisted the eight metre reinforcement over the top of the trees and into position on the upright steels already in situ. This creates the opening for the wide span glass doors and maintains the stability of the back of the house. Talking of glazing – that’s the bit we are working on at the moment. There’s a lot of it, and it’s integral to the overall design of the house.

We have been given a date to complete the build of the end of February 2019, at the moment we are a couple of weeks behind schedule, but we are looking to recoup that over the next few weeks.

Sarah and Andy will be sharing the next steps of the Number 41 build in the November/December issue of Selfbuilder + Homemaker. 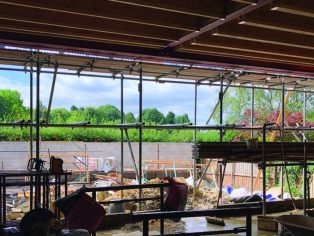