Back with a bang!

Selfbuilder + Homemaker is following first-time self-builders Andy and Sarah Ball from the start of their project to completion. The last time we heard from them, they had just lost their builder. Now, a year on, the project is firmly back on. Sarah takes up the story on the demolition and groundworks.

Well, it’s taken a bit of time, but we’re off. We have demolished the old house and the plot is ready to get building.

If you’ve been following the build of Number 41, you’ll know that it’s been a bit stop-start for us. We lost two builders, but now we are back on track and it’s all systems go. We have Paul, a contractor who is managing the build for us. He’s just completed a larger, but similar, modern super-insulated house less than a mile and a half from us, which was designed by the same architect.

Living on the plot for four years has given us a real insight into how the new house will work through the seasons. We have made a few changes to the original design – some things to make the build cheaper and others to make the most of the things we like about the position of the house.

The cost of the build was originally prohibitive for the site. The position and size of the plot means we have to be realistic about what it’s likely to be worth on completion. Andy and I had discussed removing the cantilevers and straightening up the house to reduce the amount of steel required. It also makes it a simpler house to build, but we were both keen not to create a boring house. We both like new homes to look modern. Having a 1950s flat roof house already on site meant there was a precedent to have a modernist design and that was part of the attraction to the plot.

Dan, our architect made the changes, and we love it as much as the first design. I think we were both relieved that it retains its clean lines and that we have maintained the ground floor plan in its entirety. The first floor works better for us than it did before. Of course, we have lost some of the detailing, but Dan has put in some interesting design features.

Andy and I were keen to have windows on the side where the car park to the recreation ground is screened off by trees. If we hadn’t lived in the house, we wouldn’t have known what an exciting place it is for squirrels and birds. Because of this we have had two large windows put in so that we can watch the wildlife throughout the year. On the east side of the house and next to the car park, we thought it wouldn’t be very private, but for most of the year the leaves on the trees give us cover.

With the changes made, it was time for action. To demolish a building, all the services have to be removed. As we aren’t having gas in the new house we had to arrange to get the meter taken away and the gas cut off back to the road. The electric meter needed to be moved and the water diverted. Once all this was done, the demolition could start.

Before the digger comes in, there’s a lot of recycling to organise. Sorting the materials into different piles means more of it can be reused. Once they had it sorted, the big Hyundai excavator was delivered. It was huge! It certainly looked massive on our plot. But the driver’s precision was extraordinary – he had both large and small grapplers, but he could pick off the tiniest things even with the larger ones. My parents turned up every day to check the progress and my 84- year-old mum was on photo and video duty. It was handy because Andy and I were away on business for three days of the five they were onsite.

The demolition team made sure my mum got the best views. As long as you don’t listen too closely to the soundtrack, it’s very impressive. (It included mum saying helpful things like “I’m on the video, Robert!”) She managed to perfectly film a window being picked out of the wall and placed with care into the window recycling pile.

The demolition of the house has certainly been a big talking point with neighbours and passers-by. There wasn’t a lot of love for the old house, so I’m really hoping that they like the new one as much as we do.

Within a week the house was completely gone: the relatively flat site is cleared and ready to start. Before the foundations could be laid, we had to get the tree specialist to look at whether the build would impact on the roots of either the large oak or the Cypress tree. Although there are lots of trees at the side of the house, these two are the ones we have to take care of.

Because we had deep tree roots and heavy clay, it was agreed a raft system would be the best option. Strip foundations would have to be dug to 1.8 metres and when the trench to locate the water mains was dug water was pouring in at one metre. That meant we would have serious problems with water ingress, and a big risk that the sides would collapse.

We looked at several off the shelf raft systems, but it was difficult to find one that addressed the issues of cold bridging. We want to build in a traditional block and cavity wall – because surprisingly it’s still working out the cheapest option for us.

We wanted to find a solution to address the cold bridging because the raft was better suited to the plot. It also needed to work on heavy clay and achieve the low 1.1 U-value without breaking the budget. After much discussion between Andy, Paul and Dan, they came up with a system that would give us everything we needed.

Interestingly it’s a traditional raft construction, with high insulation with innovative insulating blocks, and plasterboard to eliminate cold bridges. It requires very little excavation compared to strip foundations, so there is less rubble to remove from the site.

Currently we are waiting for some structural calculations and as soon as we have these, we will be starting on the raft. This means that the next stage of getting the walls built will be quick and we should start seeing the house take shape.

We are looking at options for the roof, windows and doors at the moment to complete the super-insulated box. It’s so important to us to get this right because the fabric of the building gives us passive energy efficiency and ensures that the costs of running the house are greatly reduced.

It may have taken Andy and I a long time to get here, but it really doesn’t get more exciting than realising our dream to build a house to live in for the rest of our lives. 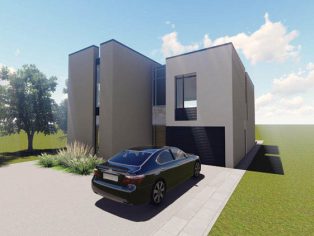 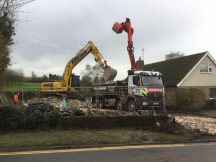