An adventure by the sea

Embarking on a self-build sans architect is not for the faint-hearted, but Joey and Charlotte Thomson decided to go the DIY route to creating their perfect coastal home

In 2015 Joey Auger and Charlotte Thomson bought a house sitting on the seafront in Smuggler’s Cove, west Cornwall – facing the Atlantic Ocean, but a building that hadn’t been lived in for many years.

“It was quite a sad story,” explains Charlotte, “the previous owner had passed away while working on building two neighbouring houses. Beach House was to be his next big project,” – his home. She adds: “We wanted to do it justice and turn it into the beautiful home that it deserved.”

They completely gutted and extended the house, and transformed it into a luxury waterside ‘forever’ home, while retaining some of the original features of the house. Those features were incorporated into what is a thoroughly modern residence.

Laid out across one level, the finished house is approximately 300 m2 and technically has four and a half bedrooms – including one small one for the dogs! The open plan living space blends with the outside to create a real sense of interior/exterior living.

The outside now features a modern extension with modern aluminium bifold doors and windows. But the couple kept the classic shape of the building – the original old stone walls are still there. They wanted to retain the character of the building, while adding a contemporary twist. A real balancing act. “It would be such a shame to rip everything out and disregard so much history in what is such a prominent part of the Cove,” adds Charlotte.

The stand-out feature is the frameless aluminium bifold doors from Rhino Aluminium. The six doors along two walls of the living space fold right back, leaving a completely open corner, with no centre column. She admits several structural engineers had told them it couldn’t be done. There were a lot of steel beams involved, up to seven metres long, tapered and angled ones, all going in many different directions, but it did the job and it’s now a ‘wow’ feature of the property.

To carry out so much work themselves took some serious confidence – and a bit of experience. The couple had renovated a public toilet in Charlestown several years before and turned it into a holiday home. But there was still plenty to learn along the way.

“Joey taught himself how to draw and do CAD (Computer Aided Design) after stepping on a nail which went through his foot, so he was out of action for over a month. All the designs and ideas were completely his own,” she says. “Joey has an incredible vision and can imagine what something will look like just by looking into an empty space! He designed every part of the house himself and drew up all the plans. We didn’t instruct an architect, only a structural engineer (John Knevitt) to calculate the drawings for the steel beams.”

Because the couple did around 95 per cent of the works themselves, they found it easier to stay within their budget and time frame – and it meant there was money left to for a few luxury extras.

The build itself took around two years and was finally completed in early 2019 after what she describes as “18 months of intense work.”

The couple – and their four dogs – lived in the property while the renovations were carried out. “The low points would be the sheer exhaustion,” she admits. “If you’re not demolishing, scraping, de-nailing, cleaning, burning, or lifting and shifting, you’re still thinking, planning what to do next; ordering materials, booking in trades, liaising with building control and the planning department. It never ends and you have to be so organised otherwise the next steps are delayed.

“The access to our house is very narrow too, so most deliveries couldn’t get down our lane. We had to buy a flatbed truck to collect materials from the end of the lane, and take them to the house. This was hard work, especially when trying to load and unload hundreds of granite slabs, boxes and boxes of floor tiles, and furniture! We couldn’t even get concrete and cement deliveries so Joey had to collect it from Maen Karn himself and drive it down the road. This added quite a cost to the build, as well as delays.

“We tried to source all of the materials locally, and support as many Cornish businesses as possible,” says Charlotte. “I think the only major thing that was shipped down from up country was the granite for the patio. There was over 200 m2 of it, and unfortunately the Cornish quarries just couldn’t compete with the prices from a supplier called Nustone up in Colchester.”

“It was difficult for us as we lived in the house during the whole renovation so the dust and dirt was just never ending. We would completely gut one or two rooms at a time, which was not the most straightforward way of doing things as Joey had to constantly think how and where the electrics were going to go, and arrange for it to be replaced bit by bit, rather than in one go.

“Luckily for us, we had the hot tub in situ, so that soothed our aches and pains every night.” One of the challenges was getting items delivered – with the property only able to be accessed down a tiny cliff path, many suppliers refused to deliver.

And while the location was the major attraction, it wasn’t without its challenges. “We are very limited as to what we can and can’t use, because of the damage caused by the sea salt and wind. For example, all our handles and fittings have to be marine grade stainless steel, so we used a local company called The Coastal Group in St Austell, who supplied us with a range called ‘Blu’ specially designed for such harsh locations.”

Inside there are contemporary, geometric touches in the light fittings and furniture and reminders of the original building. The bathroom is very ‘zen’, enhanced by original features:

“The old stone wall has been retained, as has its little inset archway that was once the outside boundary wall of the house before it was extended.” In one of the bedrooms, the original wooden window seat was retained and restored, “as it’s such a special part of the original building.”

Joey adds: “We wanted the house to have a coastal style, but were careful not to fill it with typical touristy nautical things – it needed to be classy and chic. And while the house has a clear aesthetic, it is mostly a home.”

Inside, his favourite feature is his fish tank. Another of Joey’s own designs, it sits between the thick cob wall separating the office and cinema room, where a door once was. Even the fish match the sofa colours!

For the interior scheme, the couple sought inspiration from Cornwall’s classiest hotels and restaurants: the perfect excuse to visit favourites in St Mawes and Carbis Bay. As a result a lot of the interiors are teal, yellow, and grey, supporting the soft coastal theme running throughout the rooms.

Reclaiming ornaments has become a passion. As well as staring out to sea and enjoying the waves lapping on the shore or the sunset, Joey and Charlotte are often on the look-out for beach debris that they can make use of. “Over the past couple of years, we have seen huge phone masts, and other large chunks of driftwood wash up on the beach, so we are often down there like crazy people dragging up what we can! We have used some of the driftwood in the garden and patio as feature pieces.

“I wanted to cover the fireplace in pebbles off the beach, but there are strict rules now about doing this, so it wasn’t worth getting in trouble over! Instead we brought pebble tiles to use as a feature fireplace area and they look wonderful.”

Another key find was the cannons that now guard the garden. “They were pulled up from a shipwrecked boat called the Hanover 22 years ago – you can see the rock in the distance where it went down in 1763.” The cannons have been restored to their former glory, having been sandblasted and re-coated, with new bespoke carriages made to measure locally by a Cornish joiner. “It was quite an extravagance but they are so important to the history of the area, we couldn’t not do it!”

Although they would advise anyone undertaking their own self build to not to over spend their budget, Joey and Charlotte did invest in a few key pieces. “Because Beach House is our forever home, we did splash out on a few extravagant items but they were worth every penny. We wanted a low maintenance, high-impact designer fire so went for a stunning long and narrow contemporary fire from Stovax which has white pebbles against black granite. It is open fronted so no glass. It’s just a real wow factor.

“Our other real ‘treat’ was our gorgeous copper slipper bath from Heritage. It is so deep and luxurious, and we’ve designed the bathroom so it has a spa feel, all low lighting and candles. I often spend hours in there, if the dogs allow me!”

The original plan includes a covered swimming pool building in the garden too which was approved and they hope to add that in 2020.

But after many, many cuts bruises and sore muscles, the end result is worth it. “Looking at a finished job and feeling like you could burst with pride because you did that! You transformed that room from somewhere you wouldn’t even let your dogs go into, to something beautiful. You can’t beat that feeling.” 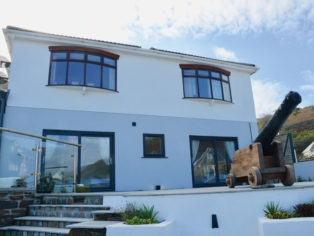