Taking an alternative route to drainage

When building or renovating a home with no connection to mains drainage for the disposal of sewage, alternative options have to be considered. Burnham Environmental Services’ Mark Newbery explains further

These are as follows:

These regulators operate in different ways, and consequently generalisations have to be made. For example with the EA in England, a document produced by DEFRA (Department of the Environment, Fisheries and Rural Affairs) entitled ‘General Binding Rules for Small Sewage Discharges’ (SSDs), with effect from January 2015, is the yardstick.

The standard checking procedure starts off with the question ‘how far is the site from the nearest public foul sewer?’ If more than 30 metres then alternative options can be considered in most cases.

If considering pumping to a public foul sewer there needs to be checks regarding the legal rights of access, connection fees, obligations in perpetuity, and the technical aspects of pumping and storage. Package pumping stations are available constructed in glass fibre (GRP) or other materials with pumps of different types.

If a property’s wastewater cannot be connected into a sewer, there are three alternative options: a cesspool, a septic tank or a package treatment plant.

Under current naming conventions a cesspool is a holding tank that has no overflow and from which all the effluent must be taken away by a licensed tanker firm. Compliance with Building Regulations requires a large capacity tank of several thousand gallons. Even with extreme water saving measures the cost of emptying a cesspool is likely to be several thousand pounds in a single year, and so the use of cesspools is therefore best avoided.

Septic tanks are much smaller tanks than cesspools with two or more chambers that settle out some of the solids that come into them. However the liquid part remains a strong, polluting liquid that may only be dispersed into a system of soakaway trenches, sometimes also called sub irrigation systems. Soil porosity tests have to be carried out in accordance with BS6297:1983 and the Amendments of 2007 and 2008, and the soakaway system sized and designed accordingly. The trenches need to be constructed with 25 mm-40 mm clean stone to a depth of 400 mm, around a rigid 100 mm diameter pipe with slots or holes at the bottom. The width of each trench is normally 600 mm or 900 mm, and there needs to be a suitable covering sheet.

Traditional herringbone soakaways are best avoided as if the main artery blocks the whole system may block. A rectangular grid allows alternative pathways. On sloping ground soakaway trenches should be constructed at a constant depth along one or more contours.

BS6297:1983 requires that septic tank soakaway trenches should only be constructed where there is at least one metre of soil between the soakaway and the water table at all times. This rules out the use of septic tanks in many areas where there is low lying flat ground with clay soil and a high water table.

For septic tanks there may also be a restriction on their use due to underground sources used for extraction of drinking water. In England, check the EA’s Protection Zones or ask a specialist to check this for you. There may also be restrictions with respect to Sites of  Special Scientific Interest (SSSI) or similar sites where installation is within or near to such a site.

The discharge of septic tank effluent into a watercourse, including ditches, has been illegal since the 1960s. DEFRA now requires that any existing discharges are stopped by 2020.

Septic tanks should be emptied once per year to avoid failure of the soakaway system.

Package treatment plants are the modern alternative to septic tanks that produce a clear effluent suitable for discharge into a watercourse if one is available. The effluent is typically 20 times cleaner than that from a septic tank. Most new properties built in the countryside nowadays use treatment plants as they represent the environmentally friendly option.

If no watercourse is available, the treated effluent still needs to be discharged into a system of soakaway trenches. The use of a treatment
plant may overcome the difficulties of a high water table, underground water supply areas or sites of special scientific sensitivity.

To overcome a high water table or discharge into a watercourse that may flood, it can also be necessary to use an automatic effluent pumping system that manufacturers supply with their treatment plants, normally as an optional extra. These systems are designed with a non-return valve that prevents any back flow.

A number of different types of package treatment plant are available. The ones with complicated mechanical and electrical components are becoming less popular and aeration of the sewage with a small air blower is now commonplace.

Some of the aerated systems still have a septic settlement stage that poses the risk of odours and the need for emptying once or more times per year. The better systems aerate all the sewage that comes into them, including all solid matter. The best systems will go for several years before they need to be emptied. The use of linear air blowers provides operation that is efficient and economical with little maintenance required for the best systems. Package treatment plants should be located no nearer than 7 metres from inhabited dwellings.

In selecting your wastewater solution for off-mains drainage it is important to cover the requirements of the appropriate environmental regulator, BS6297:1983 as amended and local Building Regulations. 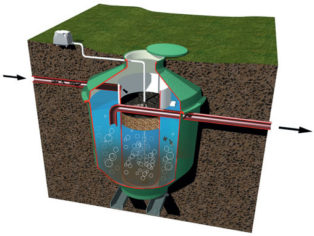 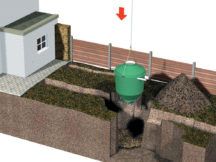