Swindon’s unique Self Build visitor centre, the NSBRC, has been ‘Highly Commended’ at the annual Employee Ownership Awards.

The Awards were presented by BBC News Presenter Martine Croxall at a Gala Dinner on the first evening of the EOA Annual Conference on 23rd November 2015 at the Hilton Birmingham Metropole Hotel.

The Employee Ownership Awards are the most sought after accolade for all those involved in employee ownership in the UK. The National Self Build & Renovation Centre (NSBRC) was nominated in the category of ‘Rising Star of the Year’ – one of 5 categories open this year.

Each category was free to enter and nominations were judged by an independent panel of employee ownership experts, chaired by the Employee Ownership Association.

The Rising Star of the Year award is to recognise the success of an organisation that has become employee owned within the last 3 years. It is to celebrate a business that is already, in its early life, becoming an effective company with a very strong culture of employee ownership.

“We are delighted that, in our first year as a brand new employee owned business, we have been recognised at such a prestigious event. We were happy to have been nominated, so to be highly commended from a short list of 13 entrants is an honour. Being employee owned has made all the difference to our business and I am really pleased that our team is being recognised for all of the hard work and courage they have shown to make the Centre the success it is becoming. They deserve all the praise they get and are all a delight to work with.

“This has given us extra motivation as we head into 2016 to grow on our successes this year”.

“I am proud that the National Self Build & Renovation Centre have been Highly Commended in the Rising Star Category of the 2015 UK Employee Ownership Awards. To have already, in its early life, such a strong culture of employee ownership is a testament to the hard work and dedication of all of the employee owners.”

The NSBRC offers free entrance and is open Tuesday to Sunday all year round. For more information or to book tickets visit: www.nsbrc.co.uk 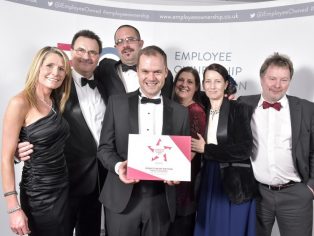