The Hemp House project at Bassingham, Lincolnshire, has been awarded the title of Best Individual New House at the Grand Final of the LABC Building Excellence Awards.

The 162m² Hemp House complements the existing buildings in the area, and consists of a lounge/diner, kitchen, pantry, plant room, front and rear lobbies and a downstairs bedroom with an en-suite accessible from the hall and the bedroom. Upstairs are two bedrooms, an office and a bathroom.

Having done a significant amount of research into alternative materials and methodologies, Paul and Nicola created the design concept as well as acting as project managers and sometime hands-on builders of their new home.

“We set out to build a house that had as low an environmental and energy impact as we could achieve in its construction, as well as being a healthy house that used the minimum of energy to run and was easy to maintain.”

In addition to working alongside the clients on the design of the house, Stephen George + Partners produced the technical drawings and steered the proposal through a demanding planning application process.

“Planning was not straight-forward. The setting for the house was extremely sensitive, including existing trees surrounding the site. Initially, the planning officers wanted a single-storey building, but they accepted the merits of a design that is single storey at the back, which faces onto open fields, and two storeys at the front, facing the village street.”

The design has a timber frame with Hempcrete construction for the external house walls. Hempcrete uses about one third of the energy of a traditional brick wall with no toxic emissions. Without needing a cavity or additional insulation, Hempcrete creates a breathable wall with good insulation levels. The hemp was grown in East Yorkshire so few “air miles” were consumed in the process.

“We sought a good airtightness for the building and were pleased to achieve a figure of 1.78. The house has an “airlock” lobby at both the front and back doors to minimise the heat loss on passage to/from the house in the colder months.”

The design concentrated on the installation of renewable technologies to achieve the energy efficiencies the clients required. Due to the high levels of airtightness and insulation in the construction, an air-source heat pump is sufficient to run underfloor heating on the ground floor and one oversized radiator in the upstairs bathroom.

Constraints in the planning approval prevented a PV array being installed on the house roof, but a 4kW system has been sited on an outbuilding roof. This has produced sufficient electricity for Hemp House to become a net exporter of power.

“This has been a very successful project; the house is as warm as we would wish thanks to the renewable technologies used.” 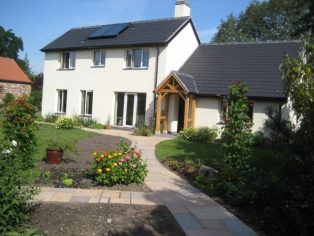