After years spent debating how best to remodel his single-storey bungalow, during which time three separate planning applications were approved, he finally took the decision to demolish the property altogether.

“My father’s a property developer, who has worked with Western Design Architects on various projects, and I also became friends with the company’s founder, Phil Easton,” says Simon, who previously lived in a traditional-style farmhouse he built, which was designed by the practice.

Established in 1986 by Phil, when it was based in his garden shed, the business has grown into a respected and award-winning Dorset design practice. Coincidentally, Western Design Architects had also designed a pair of highly contemporary properties in Simon’s road: striking timber-clad boxes, perched on a concrete plinth and constructed around a steel frame.

Simon and Phil are fellow motorbike enthusiasts, who have travelled to far flung corners of the world on their bikes, and a spacious garage was one of Simon’s top requirements to house and maintain his bikes.

“I bought the bungalow, which was in a tired but decent condition, back in 2005 mainly because of the location and views across Poole Harbour,” explains Simon, a claims manager. “The first planning application in 2008 was for a new pitched roof and first floor to convert it into a two-storey house, which was approved.

“Three years later I worked with Western Design Architects, once again, and applied to replace the pitched roof with a second storey and a flat roof, as well as extending to the rear to infill an existing corner. A year on, in 2012, we revised that application, but despite gaining approval I never went ahead with the work.”

Situated in the charmingly-named Lilliput, less than a five-minute drive from Shore Road Beach in Sandbanks, the 1960s bungalow stood in an area which is slowly being redeveloped, with contemporary new builds springing up along Simon’s road inspiring him to consider a similar project himself.

“It turned out to be more expensive to convert the roof of the bungalow when compared to demolishing it and building a new house, so in 2016 I went back to the architects to put together a new application for a contemporary new build home, exactly how I wanted it and without the restrictions of the existing building,” he explains.

The low-slung bungalow consisted of painted brickwork walls with a brick plinth, plain concrete roof tiles and white PVCu windows: a simple design of little intrinsic merit, which was no longer appropriate for its developing surroundings.

Orientated east-west, the plot enjoys enviable views of Poole Harbour and Simon was keen to make the most of the fantastic location with his new design proposal. Working with Phil Easton and project designer Rianna Holliss of Western Design Architects, he was determined to build something with architectural merit which would also be ideally suited to his lifestyle.

“Having designed two other properties further up the road, we knew the outlook from upstairs was going to be incredible – with panoramic views over Poole Harbour, Sandbanks and to the Purbecks,” explains Rianna, who also lives in Poole and says she thoroughly enjoyed working on the design.

“Simon was quite open with his brief and flipping the layout to place open plan living accommodation upstairs with bedrooms on the ground floor made sense – especially as he was keen to have a large and impressive entertaining space.”

The upside-down house was therefore designed with four ensuite bedrooms, a garage, dressing room and utility on the ground floor, and an open plan kitchen/living/dining area upstairs.

“We started sket facing the view,” says Rianna. “Working within the exact footprint of the original bungalow and designing for the narrow, sloping site, she admits the project was a challenge: “It took quite a long time, and Phil and I experimented a lot with the design until we were happy, changing some details multiple times because we wanted everything absolutely perfect to meet Simon’s expectations. It had to be really crisp.”

The site stands on a hill, which rises up roughly three metres from the rear to the front of the plot, west to east. The new design proposal took account of the sloping nature of the plot and reduced the overall height of the first design, which had been approved back in 2007 and consisted of a pitched roof approximately 1.7 metres taller than the latest application.

“We positioned the house further away from a neighbouring property on the ground floor, where there are glazed openings, allowing the first floor of the design to protrude out, improving the outlook to the rear without limiting neighbours’ views,” explains Rianna.

Visually, the new house could not be more different from its predecessor. Angular and minimal, the linear design exudes a pared-back masculinity, with two main rectangular forms on the front facade – one vertical and one horizontal – cantilevering out over the garage almost to the existing building line of the neighbouring property.

These letterbox-like forms are inset at different planes and are joined by a recessed glass link, which accentuates the main entrance to the house. White render and contrasting pale grey cladding further define the building’s lines and echo other contemporary houses in the area.

This style is replicated to the rear of the house, with an L-shaped element outlining a large glazed area. First floor glazing consists of four main panels: two fixed at either end, with two sliding central doors opening onto a Juliet balcony.

The L-shaped white frame protrudes out further than the glazing by 0.5 metres to serve as ‘blinkers’ and prevent overlooking into neighbours’ gardens. To respect neighbours’ privacy, there are no windows to the first floor side elevations facing neighbouring properties to the north and west.
“Rianna and Phil encouraged me to pull together ideas to share on a Pinterest board, and almost all the houses I preferred were white rendered and angular, with flat roofs,” explains Simon.

“The house designs came from all around the world, but saving them together on a Pinterest board showed common themes, which Rianna then worked into her own design. Everything was tailored to my preferences rather than what she thought I should have.”

The existing driveway remained in the same position, allowing vehicles to access straight from the road, and an accessible path and a level threshold to the entrance door avoid the need for steps and improve disabled access.

“Western Design Architects were great to work with, from the first approval in 2007 all the way through to the third and final approved design in 2016,” says Simon.

“They always understood what I wanted to achieve and helped me pinpoint what I needed within the design, based on my lifestyle and hobbies. As for the final look and form of the house, I couldn’t be happier with what Phil and Rianna created.”

Planning permission was granted for the replacement dwelling, and Simon moved out so that his old home could be demolished. The site was cleared in readiness for the new steel- framed structure to be built in its place, using wooden infill panels with wood fibre insulation, to which the render was applied. The cantilever is achieved thanks to the building’s steel frame, and a single-ply roofing system was chosen for the flat roof.

All the windows are aluminium-framed, and the rear fixed glass panels and sliding doors in the living area were made bespoke, due to their huge size. The grey external timber cladding is apparently the first of its kind to be used in the south of the UK.

“I built the house with my eldest son, Henry, who I can’t praise enough. He took the bull by the horns and was 100 per cent dedicated every step of the way – I don’t know what I would have done without him by my side throughout the whole process,” says Simon, who referred closely to the original SketchUp model of the house during the build process.

“We worked all hours, doing most of the work ourselves to save as much money as we could. The house was built in a year and was liveable, but we then spent another year fine-tuning all the details.”

Simon lived offsite at a friend’s house during the build and invested a great deal of time and energy ensuring that finishes were of an extraordinarily high standard.

“I’m a perfectionist and monitored every stage really closely,” he says. “With so much natural light, any flaws are easily visible – especially with such crisp straight lines – and I knew that errors would be glaringly obvious.”

Internally, the finishes are predominantly white walls and ceilings, with contemporary concrete flooring and exposed metal detailing around internal doors, continuing the pared-back feel. Natural light from the vast swathes of aluminium-framed glazing in the house reflects across these surfaces, and is complemented by thoughtfully designed artificial lighting.

“Most of the main furniture pieces – for example the chess table in the main entrance hall and the pool table that doubles up as a dining table – were purpose made by different specialists,” says Simon.

From the entrance, a bespoke cantilevered stair with illuminated walnut treads and a glazed balustrade leads up to the open plan first floor. Here, the kitchen has been carefully designed so that at no time is it necessary to turn your back on the view or to guests.

“I employed a specialist painter to create feature walls in the main living space and upstairs toilet,” recalls Simon. “They add interest and appear textured, like wood or stone, without detracting from the architecture,” he adds.

Cleverly, the emphasis has been directed outwards so that the views are captured and form the main focus of the new house. “Previously you couldn’t see very much at all from the ground floor, but by putting the living space upstairs and introducing so much glass – it’s made the best possible use of the site,” says Simon, who recently returned to the UK after travelling.

“I’m very glad that I didn’t settle for just converting the old bungalow, as I’d originally planned. Now I have an energy efficient home, designed exactly to my needs, which is perfect for entertaining. It ticks all the boxes, such as having enough garage space, and has allowed me to get involved in a really exciting project.” 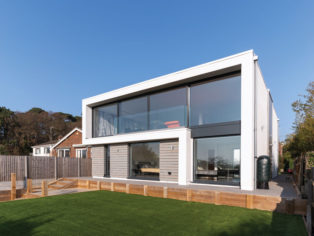 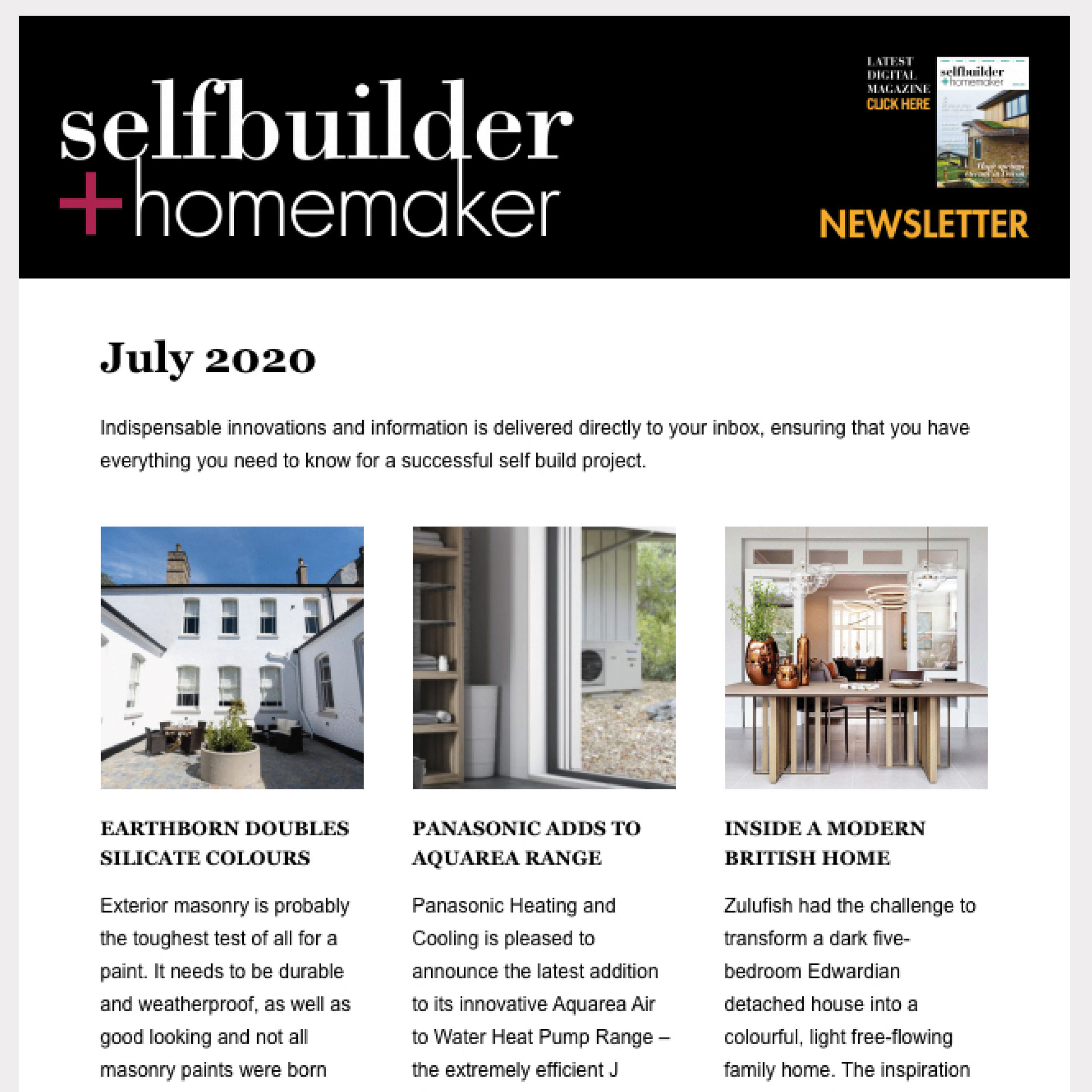