Looking beneath the surface

David Sherry from Dreadnought Tiles explains the importance of looking beyond the marketing when choosing traditional clay plain tiles.

The use of traditional building materials is widely recognised as a vital part of preserving the unique character of our old buildings and the integrity of our conservation areas.

However, in today’s marketing-driven society, things aren’t always quite what they seem, making it difficult for self- builders and home renovators – or even building conservation officers! – to discern what is in fact an authentic English plain tile, and what is an imitation.

Loaded words such as ‘traditional’, ‘heritage’ and ‘conservation,’ widely used to describe clay plain tiles, may refer to genuinely handmade or handcrafted products with an idiosyncratic look, or alternatively more uniform looking, volume produced machine-made, or even large format versions.

Similarly, the term ‘natural colours’ is often used, regardless of whether the colouring has been generated solely by skilful temperature control in the kiln, or through the use of artificial pigments.

These days, even the names of roof tiles can be potentially misleading. Just because a brand of roof tiles sounds old fashioned and quintessentially English, it doesn’t necessarily mean that they have actually been manufactured on these shores. They may, in fact, have been imported from Poland or Turkey, or even as far away as Vietnam.

In order to identify what is genuinely authentic, it is important that self-builders and home renovators look behind all the marketing and understand something of the history of clay roof tile making in the UK and how it has changed today.

The geography of natural clays

The starting point for identifying authentic clay roof tiles is always the origin and quality of the raw clay.

The UK has a range of different clay deposits across the country, each with their own distinct characteristics and properties. These have lent themselves to the manufacture of the different types of roof tiles found in different areas and have helped form the basis of our varied regional architecture.

For example, Alluvial clay from the Humber and Bridgwater, which has a low shrinkage during drying and firing, is particularly suitable for producing large clay units such as interlocking pantiles. Weald clay from the south east of the country is associated with red, brown and orange clay tiles – often handmade and sand-faced – which is a characteristic in the south of England. Etruria Marl, found in central UK and the Midlands, has a high shrinkage rate in the manufacturing process, which lends itself to the production of very dense, strong smooth faced or sand faced plain tiles. With its high iron content, this material can be fired to produce a wide spectrum of colour from reds and browns through to Staffordshire Blue.

Plain clay roof tiles manufactured from native English clays are not only a sustainable option, but their natural characteristics are the most suited to our regional architecture.

Originally, plain tiles were made individually by hand, resulting in their characteristic variation of shape, camber and tone, with more regular shaped machine-made versions starting to appear in the early 19th century.

Integral to both methods of production were the natural clay colours which were created purely by the temperature in the kiln. Over the centuries, different tileries developed their own kiln-firing techniques. For instance, in the Midlands, with the rapid development of the coal fields and the abundance of Etruria marl in the 1900s, manufacturers started to place the tiles on their edge in the kiln, instead of stacking them one on top of each other, or firing them face to face which they did elsewhere in the country. This new method allowed the kiln’s atmosphere to come into contact with the exposed surface of the tile, causing a chemical reaction with the iron in the clay, producing natural ‘brindle’ colours from red to buff to brown to purple and ultimately Staffordshire Blue.

This technique was adopted by the Broseley works in Shropshire, Hawkins and Rosemary in Cannock, Ruabon in North Wales and Dreadnought in Brierley Hill and, with the growth of the railways, canal and river network, became used far beyond these localities.

The decline of traditional tile making

Sadly, the UK clay roof tile industry went into decline after the Second World War, and the majority of the surviving companies were bought by multi- national organisations, which often retained the old brand names, but moved production into new factories dedicated to providing manufacturing efficiencies.

Traditional firing techniques that had generated natural clay tones for centuries were largely replaced by the application of surface stains and coloured sands, which do not produce the same subtle colour variation associated with historic clay roofs. As a result, many of the ancient tile names associated with historic colours, such as ‘light’ and ‘dark’ brindle now bear little resemblance to the originals.

More recently, we have also seen an influx of low cost imported tiles bearing the names of old English towns and the introduction of larger format single lap interlocking tiles describing themselves as ‘plain tiles’. Although their exposed faces can be made to resemble the appearance of two plain tiles laid side by side, they essentially perform as ‘single lap’ and do not make a good substitute for authentic heritage roofing.

The challenge for homeowners

For self-builders and renovators, researching the suitability of so called ‘traditional’, ‘heritage’, or ‘conservation’ clay plain tiles for a traditional looking home or restoration, our advice is to look beyond the manufacturer’s marketing.

Work closely with your local planner or Building Conservation Officer and find out how and where the tiles were actually made in order to determine how genuinely traditional they really are. 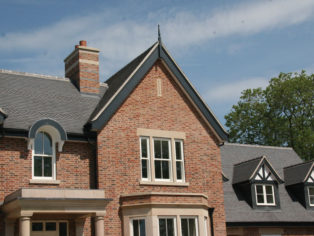