Kitchens International’s Sales Designer Karen MacArthur has been awarded the KBSA Kitchen Concept Designer of the Year in the 2014 KBSA Designer Awards this week. This new award is the first of its kind in kbb awards and is chosen from a common brief.

Karen, who works at KI’s Dundas St studio in Edinburgh, was up against three other KI designers who were all finalists so the competition was tough. The judges commented that: ‘Karen’s was an excellent design they rated highly, and noted the mirror splashbacks as an unusual feature. Using a mix of mid and tall units was not intimidating, but allowed Karen the opportunity to express her design skills to the full.’

“The judges were again impressed with this year’s entries. It is an honest way of judging this particular award as it’s a single brief, rather than other categories where the brief is specific to each entry.”

“We are delighted that Karen’s design won and it demonstrates again the expertise, imagination and skill of our designers which we aim to nurture from day one with the company.” 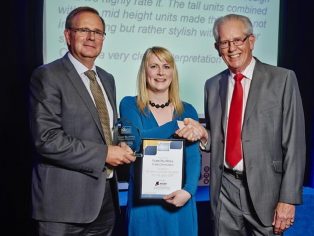 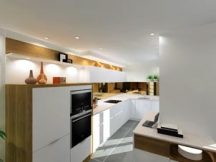