How to deal with wasps nests this summer

Where do Wasps Nest?

Wasps can nest anywhere that’s suitable for them to breed, feed and build nests relatively undisturbed. They prefer places they can easily get access to which include wooden sheds, guttering and loft spaces, although it’s not unheard of nests appearing indoors – albeit slightly less common.

You may also find nests in:

Strictly speaking, wasp nests themselves are not dangerous. If, for example, you’ve discovered one out of the way at the bottom of your garden then it’s unlikely to cause any harm. The wasps inside can be split into two types, social and solitary – if disturbed it is the social wasps that present potential dangers.

Inside a Wasp Nest

Wasps nests have one purpose and one purpose only – to ensure that more young are produced and that the line of the species is able to continue into the next year. And while you may have seen a safely abandoned wasp nest before, a fully working nest is a whole different story.

The nest is organised into ‘cells’ which the queen populates with the larvae of young wasps. The queen will lay eggs inside paralysed insects which, once they’ve hatch, will feed on the insects who have been their host. Once the wasps have grown by the summer, they’ll start to help build the nest and make sure it’s maintained.

When Do Wasps Die Off?

As the summer draws to a close, a wasp colony will produce some new males and queens – these will fly away from the nest, mate and the queens will find somewhere to hibernate.

Once winter kicks in…

Once winter is over, any surviving queens come out of hibernation and start on the building blocks of a new nest. After the initial structure is in place somewhere sturdy and sheltered (which is why wasps often choose loft spaces and guttering) the queen will start to lay eggs in the nest’s cells. The eggs hatch, the young grow, they continue to build the nest and the process continues for another year!

If you’re spotting the early signs of a wasp nest or, when summer is in full swing, you’re experiencing the effects of a nest in or near your property then our team can help. We offer a specialist wasp nest removal service that ensures a safe and effective method of removal – so you don’t need to try risky home removal methods!

For help removing a Wasp Nest, contact Goodwin Pest Management on 0800 634 2530 or read more on their website: http://www.gpmpest.co.uk/news/when-wasps-die-off-nests 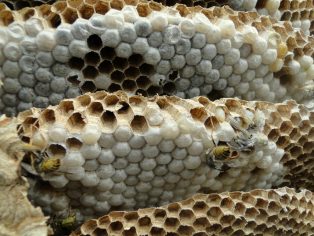